Welcome to the Worlds of Karen Myers

Saving 2700 lives during a terrorist attack—a staggering cap to an impressive military career. 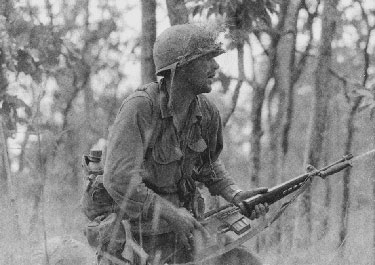 Cyril Richard “Rick” Rescorla, born in Hayle, Cornwall in 1939, began his military career in the British Army in 1957 and served three years in Cyprus, and then enlisted in the Northern Rhodesia Police.

He moved to the US and joined the US Army in 1963, and was assigned as a platoon leader to the Bravo Company of the 2nd Battalion, 7th Cavalry, Third Brigade of the 1st Cavalry Division, where he was nicknamed “Hard Corps” for his commitment to excellence. His battalion was sent to Vietnam in 1965 where it fought in the first major battle between American forces and the North Vietnamese Army at Ia Drang.

The above photo served as the cover for Colonel Harold Moore's 1992 memoir We Were Soldiers Once … and Young which was later made into a film by Mel Gibson. Rescorla's actions were featured prominently, though he wasn't named as a character in the movie.

From an annual tribute at NeverYetMelted:

For his actions in Vietnam, Rescorla was awarded the Silver Star, the Bronze Star (twice), the Purple Heart, and the Vietnamese Cross of Gallantry. After Vietnam, he continued to serve in the Army Reserve, rising to the rank of Colonel by the time of his retirement in 1990.

Rick Rescorla became a US citizen in 1967. He subsequently earned bachelor’s, master’s, and law degrees from the University of Oklahoma, and proceeded to teach criminal law at the University of South Carolina from 1972-1976, before he moved to Chicago to become Director of Security for Continental Illinois Bank and Trust.

In 1985, Rescorla moved to New York to become Director of Security for Dean Witter, supervising a staff of 200 protecting 40 floors in the South Tower of the World Trade Center. (Morgan Stanley and Dean Witter merged in 1997.) Rescorla produced a report addressed to New York’s Port Authority identifying the vulnerability of the Tower’s central load-bearing columns to attacks from the complex’s insecure underground levels, used for parking and deliveries. It was ignored.

On February 26, 1993, Islamic terrorists detonated a car bomb in the underground garage located below the North Tower. Six people were killed, and over a thousand injured. Rescorla took personal charge of the evacuation, and got everyone out of the building. After a final sweep to make certain that no one was left behind, Rick Rescorla was the last to step outside.

All of this, however, is but the preamble to the heroic end of his life—directing the evacuation of the South Tower of the World Trade Center in New York City on September 11, 2001 after the first terrorist plane hit the North Tower. 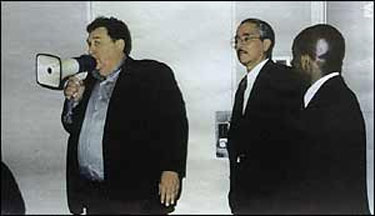 Rescorla was 62 years old, and suffering from prostate cancer on September 11, 2001. Nonetheless, he successfully evacuated all but 6 of Morgan Stanley’s 2800 employees. (Four of the six lost included Rescorla himself and three members of his own security staff, including both the two security guards who appear in the above photo and Vice President of Corporate Security Wesley Mercer, Rescorla’s deputy.) Rescorla traveled personally, bullhorn in hand, as low as the 10th floor and as high as the 78th floor, encouraging people to stay calm and make their way down the stairs in an orderly fashion. He is reported by many witnesses to have sung “God Bless America,” “Men of Harlech, ” and favorites from Gilbert & Sullivan operettas. “Today is a day to be proud to be an American,” he told evacuees.

A substantial portion of the South Tower’s workforce had already gotten out, thanks to Rescorla’s efforts, by the time the second plane, United Airlines Flight 175, struck the South Tower at 9:02:59 AM. Just under an hour later, as the stream of evacuees came to an end, Rescorla called his best friend Daniel Hill on his cell phone, and told him that he was going to make a final sweep. Then the South Tower collapsed.

Rescorla had observed a few months earlier to Hill, “Men like us shouldn’t go out like this.” (Referring to his cancer.) “We’re supposed to die in some desperate battle performing great deeds.” And he did.

More observations about Rescorla and his career, singing all the way.